Why not book it onboard?

Travelling in this unprecedented age of connectivity is a different proposition for Millennials and Generation Zeds, who were born digital natives and increasingly demand connectivity everywhere they go. Air travel does not escape these expectations and woe betide any airline that offers poor quality connectivity.

In the recently released third chapter of the ‘Sky High Economics’ report, the London School of Economics and Political Science (LSE) found that 70% of Gen Z and Millennial flyers would prefer to wait and buy travel services while in the air.

On top of that, the report suggests that this consumer group currently spends a collective $3.6bn on items and services in the weeks leading up to a trip and upon arrival, which presents a significant opportunity for airlines to take a slice of this revenue, if they can shift this last-minute spending onboard.

Tapping in with EAN

Providing reliable, high-speed inflight connectivity is a key part of the puzzle that will see airlines tapping into the revenue-earning potential offered by these digitally-savvy, always-on passengers.

EAN delivers broadband in that air that’s as good as it is on the ground, with speeds of up to 75mbps and the lowest latency in the market – ten times lower that any of its competitors.

To date, over 7.5 million passengers have travelled on more than 55,000 flights with access to EAN. The service is currently being offered on over 170 British Airways, Iberia and Vueling aircraft flying over 400 routes across the continent. And the response from both airlines and passengers has been overwhelmingly positive.

To showcase just how fast, smooth and valuable EAN’s service is, leading aviation analyst Alex Macheras was challenged to use the unique integrated service to ‘build a break’ using purely the onboard Wi-Fi powered by EAN.

Gifted an extremely budget break in Barcelona, the industry influencer was provided with accommodation in a basic hostel, along with a few vouchers to eat at a fast food restaurant. Macheras was then challenged to upgrade every single aspect of this city break from the comfort of his seat, during his outbound Vueling flight from London Gatwick to Barcelona, which was filmed.

Macheras started his trip by logging onto Vueling’s inflight portal and purchasing a connectivity package for the duration of his flight. A few minutes into the flight, Macheras observed “it’s worth pointing out that so far, this is proving to be more reliable than the Wi-Fi in some rural areas in the UK”.

After accessing the EAN-powered connectivity service, Macheras made quick work of upgrading his accommodation to the five-star W Hotel next to Barceloneta Beach, added a Segway tour around the city, as well as a massage booking at a top spa to his day’s activities and a restaurant reservation for dinner. And finally, after remembering he forgot to bring a book for the trip, he ordered one from Amazon minutes before the flight landed, which was delivered to his hotel the next day. All of this during an extremely productive two-hour flight before he reached his destination.

“It couldn’t have been easier,” Macheras revealed. “The Wi-Fi was easy to log into and purchase, then EAN’s speed was impressive, with no interruptions and no drop-outs, just as promised.”

When pressed further about his thoughts on inflight connectivity for the future, Macheras divulged, “This kind of onboard Wi-Fi is so appealing to the generations that I fit into, kind of between the young Millennial and the Gen Zed. Both have this expectation that everything should happen now, everything should be instant, everything is much more interesting provided that it is now, not something that was seen yesterday. When travelling, IFC facilitates that.”

He added, “My work requires me to be in the air a lot, and the idea of being on an aircraft, basically in a carbon-fibre tube for many, many hours and being disconnected is hell to me, no matter what type of cabin it is, whether it’s business or first class, it’s just that disconnect. I’m pretty sure much of my generation feels like that.” 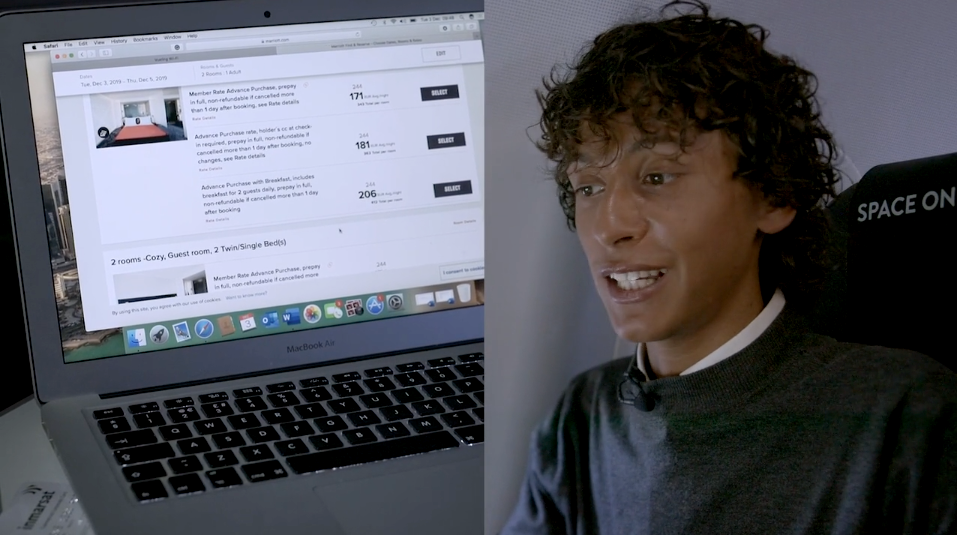 Connectivity for the future

The purpose of the challenge was to demonstrate just how easy it is for passengers to leave holiday admin until they are on their way to their destination, making the most of the spare couple of hours on the flight. The video of Macheras fulfilling his challenge shows first-hand how EAN makes it is possible for passengers to book hotels, local activities and restaurants at the last minute in the air, saving them precious time on the ground.

For European-based airlines, who are looking to capitalise on those Euros spent in the air, EAN is a no-brainer. Not only does EAN offer the best coverage and fastest service in Europe but it also provides customers with a cost effective, fast turnaround solution that requires just 9 hours for installation.

That means an aircraft can be delivered in the morning and by sundown it’s ready to be returned to the airline, fully installed with EAN connectivity and ready for testing, which is 80% faster than any other solution in the region.

The future is looking bright for EAN. It delivers because it was designed from scratch, with the needs of European aviation in mind. It offers consistent inflight broadband across one of the world’s most congested airspaces, with more than one billion passengers and 11 million flights per year and it can be installed in a flash.

“I think airlines will soon wake up to the reality that passengers can continue with their everyday life on the aircraft,” Macheras sums up. “We have to get rid of this stigma that once that aircraft door closes, you suspend your life for two and half hours and then pick it up afterwards. Things can continue and the way I used EAN during this challenge is evidence of that.”